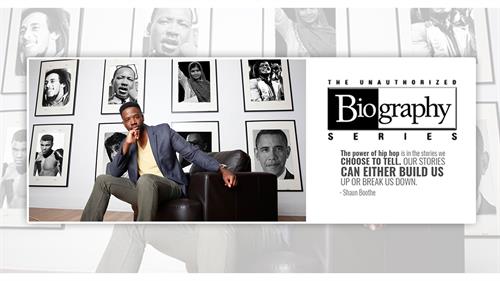 The Unauthorized Biography Series is a musical project that celebrates the world's greatest cultural icons through biographical hip hop songs. Each chapter of the series captures the legacy of an influential iconic figure in a documentary-style music video. Icons featured in the series include Bob Marley, Muhammad Ali, MLK Jr./Obama, Bruce Lee,Oprah, Tupac, Terry Fox, Nelson Mandela and more. Getting blog love from Kanye West and tweets from Diddy himself - Boothe's sixth icon in his series - it's clear that he's getting the attention of the right people.

In an industry where your live show can make you or break you,Shaun Boothe is renowned for his conceptual and highly interactiveperformances - many of which have graced the opening stages of concerts for multi-platinum artists, including Nas, Lauryn Hill, Talib Kweli, and Snoop Dogg.