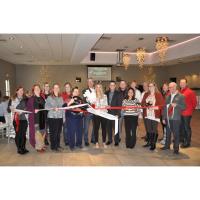 Executive Director Stephanie Sayles estimated that about 200 people made their way to the
RiverStone Premier early Friday evening for a combination open house and ribbon-cutting ceremony.
The facility, formerly Central Coast restaurant and dance club in the Robert Klement Business Park on
Fort Atkinson’s south side, has been renovated into an event/banquet facility that eventually will open
as a restaurant, as well. Owner Mark Southern called Friday night’s gathering a success, as people came for a ribbon-cutting with representatives of the Fort Atkinson, Jefferson, Whitewater and Janesville chambers of commerce, as well as music by Lost Sound, beverages and food. “I think the open house went great,” Southern said. “We are very appreciative of the support from the Fort Atkinson, Jefferson, Whitewater and Janesville chambers.” The ribbon-cutting ceremony took some arranging, with four different chambers, three sets of scissors and at least three ribbons.“We felt tremendous support from the guests and received some useful input on future events and the coming restaurant,” Southern added. “We are excited to be doing business in southern Wisconsin and appreciate the warmth and support of this community.” Sayles added, “It was incredible to have people in the venue and breathing some life back into it.” Southern and Sayles are business partners again on this venture, having collaborated on Fishermen’s Inn of Elburn, Ill., a banquet facility and restaurant that hosts weddings. Southern’s wife, Patti, runs that facility. Located at 1905 Central Coast Lane, the restaurant and dance club originally was developed by Larry and Sherry Starkweather, who had a dream of having an upscale restaurant and dance club close to home. It opened in 2007, but had been closed for approximately three years and changed ownership at  least once during that time. In November 2017, Barbara Norman and Charlz Payne of Chicago submitted a request to the city for a combination liquor license to open a full-service restaurant at the site. Their intended goal was to open Sanctuary at Central Coast the week of Valentine’s Day. For unknown reasons, that acquisition was unsuccessful. Southern and Sayles acquired the property after that, with renovations on the facility starting in March of 2018. “There was about seven-months’ construction,” Sayles explained. “We poured in concrete, took out a
lot of the partitions. We really opened up the space.” The result is a new vision for the 20,000-square-foot facility. The banquet hall was open for the event Friday, with tours showing off the stage area, as well as the bridal suite and an open space for food and dancing. Sayles said Maas Brothers Construction and Current Electric did the majority of the work on the building, and Sayles and Southern went to Luxe Productions of Loves Park, Ill., to upgrade the lighting and sound system. The end result was a spacious venue that comfortably held Friday’s crowd, with numerous conversations ongoing and plenty of spaces for small groups to venture into. “We want it to become a special venue for special events,” Sayles said simply.Already, that is coming to fruition. A special Valentines’ Day event will be held at the facility, as well as a food-, beer- and spirits-tasting on Feb. 23. Fort Atkinson High School, Sayles added, has booked its 2019 prom at the venue, which can accommodate about 300 to 350 people. But there is more to come. Sayles said that while most of the renovations are finished... continue reading HERE.
Contact:
Stephanie Sayles, Operations & HR Manager
(815) 250-4171