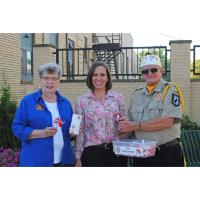 The Veterans of Foreign Wars of Edwin Frohmader Post 1879 and Auxiliary would like to announce the annual “Buddy Poppy Campaign” at local businesses throughout the Fort Atkinson area on Oct. 7 and 8.

The four flower petals of the poppy represent dedication, sacrifice, responsibility and compassion. The red of the poppy represents the blood that was shed in honor of our country. The black represents the mud and desolation on the battle field. The green of the stem and foliage represent the fields, forest and meadows where fellow Americans perished to make the United States free. The poppy has a rich history that began during WWI and was inspired by the poem “In Flanders Fields,” written by Col. John McCrae, Canadian Army artillery officer before the United States entered the war. The poem describes the blowing of red fields among the battlegrounds of the fallen.

All proceeds from distribution of the poppies are used to help care for disabled veterans and their families.
Contact:
Rebecca Houseman-LeMire, City Manager
rlemire@fortatkinsonwi.net, (920) 397-9901